Stumpy Oak: an exciting and vibrant barn dance and ceilidh band with countless years of collective experience, comprising some of the top folk and country dance musicians in the UK. Our musicians are introduced below. You also might like to take a look at some of our recent and upcoming events, including some public ceilidhs where you are welcome to come and see us in action. 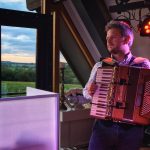 Barry Watson – accordion
Barry is an accordion and whistle player from sunny Suffolk. He is a former winner of the St Albans New Roots competition and frequently plays main stages at prestigious summer festivals including Sidmouth and Towersey. His work in a duo with fiddle player, Kirsty Cotter has seen success in the form of a CD release and airplay on BBC Radio 3. Barry manages all the bookings for the band and so is first point of contact with clients and festival bookers. 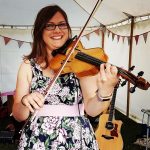 Erin Brown – fiddle & stomp box
Coming from a background of traditional Irish fiddle playing and singing, Erin first performed in the trailblazing young group No I.D. in the BBC Young Folk Awards. The group went on to make two CDs and played at the Cambridge Folk festival four times, sharing the stage with the likes of Show of Hands and Martin Simpson. When not playing with Stumpy Oak, Erin teaches folk fiddle lessons and leads community folk music workshops. The low, bass-drum-like sounds you hear in a Stumpy Oak performance come from Erin’s foot! 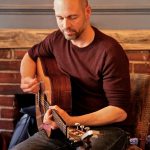 Hailing from Norfolk, Darren’s driving guitar style has placed him firmly at the heart of the local folk scene.  Having played in several bands -including Tarn, Cousin Jack, Copper Plate and Rum Kelter – he has made regular folk club appearances and main stage performances at leading folk festivals including Sidmouth, Folk in a Field, Ely Folk Festival and Folk East. Darren’s sub-octave bass notes also tend to cause a stir at events as guests approach the band to look for the hidden bass guitar player! 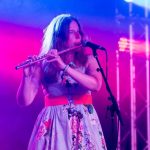 Sarah is a gifted caller, multi-instrumentalist and singer and caller. Her friendly, patient approach ensures that guests know what they’re doing or at least are comfortable to have a go! Sarah performed in folk trio Ola, reaching the finals of the BBC Young Folk Awards and releasing a critically acclaimed CD. She also has performed with the Katherine Tickell Band and the Bill Jones Trio. 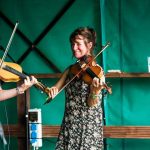 Joe Devine – guitar
When not out touring the world with other bands, talented guitar and banjo player Joe occasionally comes out to play at events with Stumpy Oak. He has a mean jig rhythm that is impossible not to want to dance to! 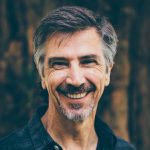 Len Marsh – bodhran
Len has played the bodhran for countless years and was a member of Tappleton’s, the Homity Band and most recently, The Cabin Band. He will happily shake, rattle or tap just about anything else to get that rhythm kicking! 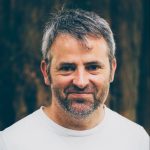 Christian Mayne – caller & DJ
As well as being an award-winning event DJ, Christian has had a long association with the folk scene through his popular Cambridge folk music radio show ‘Make it Folky’, and his involvement in morris dancing. In addition to calling, Christian plays anglo-concertina and melodeon.